Janet Schwamm explains how the Interfaith Food Pantry of the Oranges makes the philosophy of Tikkun Olam into practical realty. 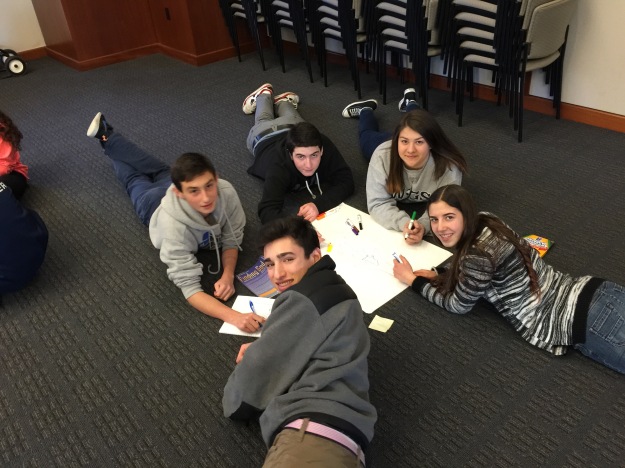 As part of our annual Confirmation Retreat our Confirmation Class studied five different Jewish theologians. Each has a unique perspective on God and the Jewish understanding of divinity.

From there the group left temple headed to Great Wolf Lodge for fun and learning.

END_OF_DOCUMENT_TOKEN_TO_BE_REPLACED 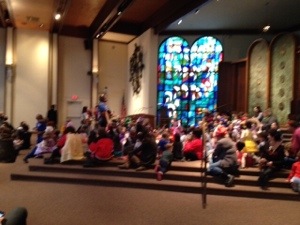 The journey toward our 6th grade students becoming bar and bat mitzvah begins in the sanctuary and social hall this morning as Torah portions are distributed and blessing are recited.

I confess I decided to go to the 2014 AIPAC Policy Conference with some apprehension and a bit of reluctance. My husband Jay has attended the Conference for the past four years and always returned full of enthusiasm, energy and inspiration. While he continually encouraged me to go with him, I continually hesitated and put it off. You see, I view myself as a mainstream progressive liberal and my perception of AIPAC was that of an organization based on and fueled by hard right ideas.

Jay and I are like souls in many ways. While most of the time our views on politics and social justice are very much in synch, occasionally we do, however, disagree on some issues about Israel. I kept my distance from AIPAC because, as I have so often told Jay, while I support Israel, I do not support everything Israel does. After spending two days with AIPAC in Washington, D.C., I feel the same about Israel in that I wholeheartedly support her, but not everything she does. On the other hand, my feeling about AIPAC has shifted dramatically.

The AIPAC Conference celebrated the State of Israel by showing the conferees Israel’s diversity, core humanitarianism, and innovative spirit. These essentials not only live within Israel herself, but also extend out from her borders to Africa, Asia, Europe, the U.S. and, indeed, the rest of the world. Here are some examples of how these attributes were brought to life at the Conference.

We heard from a young black refugee from Ethiopia, who, as a child, fled to Israel. She is now an Israeli citizen and a member of the Knesset;

We saw a film about a girls’ soccer league that brings together Israeli and Palestinian teens to play, learn, and hopefully gain a better understanding of one another. At the end of the film, two girls – two friends appeared on stage holding hands – a Palestinian Moslem and Israeli Jew;

We listened to the experiences of American doctors, nurses, and EMTs who volunteered and worked with Israeli medical personnel to treat and care for victims of disaster in the U.S., in Israel, in Haiti, in the Philipines, and other parts of the world;

We were moved by the stories from an Arab Christian physician who works at an Israeli hospital in the Galilee where Muslim and Christian refugees from the violence in Syria are welcomed and treated;

We marveled at the technological innovations Israel has developed and shares with the world – a drip irrigation system that conserves water and has helped to end Israel’s perpetual drought; a mobile device that reads text and identifies objects for blind individuals; a radar scan that can detect movement and objects through solid walls and under the rubble of earthquakes;

During the breakout sessions we attended, we also heard from panelists who talked about Israel’s unequivocal acceptance of the LGBT community as well as other instances in which Israel fosters diversity and inclusion.

The Conference itself also promoted a strong current of diverse views and people. Political leaders from the right side of the aisle to the left side of the aisle addressed the participants. We heard from Senator Charles Schumer, Senator John McCain, Senator Robert Menendez, Representative Eric Cantor, Representative Stenny Hoyer, Senator Joseph Lieberman, Representative Chris Coons, Representative Gerald Nadel, Secretary of State John Kerry, Isaac Herzog, leader of Israel’s Labor Party, Tipi Livni, Israeli Minister of Justice, and Prime Minister Benjamin Netanyahu. The reception given to this wide array of luminaries and their viewpoints was usually enthusiastic and always respectful. During the breakout sessions, open discussion and questions were invited and encouraged.

It was abundantly clear that AIPAC has devoted enormous efforts and considerable resources to engage with communities outside the Jewish community.
We heard from African American students and leaders, from Latino leaders and professionals, and from persons of the Christian faith, all who expressed their deep support for Israel. What I found most compelling was that members of these disparate groups support Israel because of her importance in history and to all religious faiths, because the struggles of the Jewish People and Israel’s struggles mirror the struggles these groups have endured, and because they view Israel as a model of a democracy at work in the face of a region in constant turmoil.

The evident thrust of the Conference was to show to the participants and ultimately to the world, the positives of the State of Israel as a free, thriving country and a hopeful guidepost in a region beset by conflict, violence and even oppression. Part of that thrust included an examination of the BDS movement , which attempts to de-legitimize Israel by calls for boycotts, divestment, and sanctions. In his speech on the last day of the Conference, Prime Minister Netanyahu described BDS proponents and those who side with them as perpetuating the age-old scourge of anti-semitism by dressing it in a new, but equally frightening cloak.

I do not doubt the problems facing Israel are extraordinarily complex and will be difficult to resolve. I do not doubt that there is and will continue to be strong debate and disagreements both inside and outside Israel on how to resolve those problems. But for now, I also have no doubt that AIPAC is playing a key role in fostering that debate by bringing it to a wider and wider audience on the world stage and in doing so, championing Israel as a democratic Jewish State.

We use every space in our building for learning! Three of our Sixth Graders studying Hebrew on the steps of our beautiful mansion.

We are so very lucky to have an Israeli Rishon- an amazing teen emissary named Omer Gavish, to help our Sixth Graders get a hands-on taste of Israel. Omer comes to us through the Metrowest’s Israel Program Center. He is one of five teens who were carefully selected to defer their army service for the year to live in our community and share their passion for Israel. 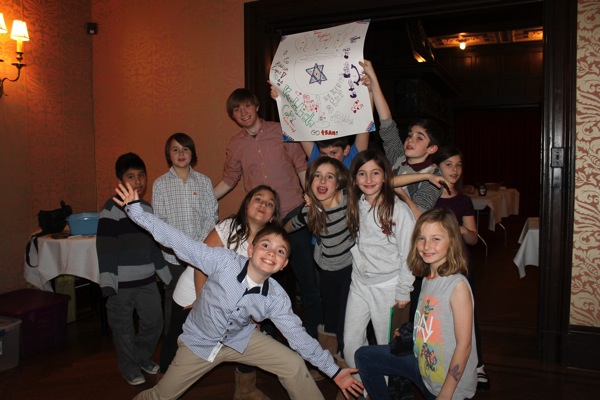 On Friday, January 31, 48 4th graders came together to participate in services, sharing music and creative readings. The service was followed by a special “Awesome Oneg” just for fourth graders. High School teens created and implemented a program about Jewish artifacts which directly relates to the 4th grade Religious School curriculum. Parents were encouraged to socialize at our main oneg. Siblings of our fourth graders had the opportunity to participate in social action projects run by our High School students. The evening truly helped build community. “Awesome Onegs” are held throughout the year for our 3rd for 5th graders.